This is a VERY interesting news letter for the future of game fishing at Cape Vidal.....Tag and release dorado!!!!!! Hope we get a say in this!!!! Your view in the Comments below please???

The iSimangaliso Wetland Park, together with Mozambique, has been protecting Africa’s first trans-frontier marine conservation area since 2009; 300km of unbroken coastline and pristine beaches from Maputo Bay in Mozambique to Cape St Lucia, the southern boundary of iSimangaliso some 20km south of Maphelane resort.

Within these protected areas lies one of the world’s most important reserves of marine life. Famed for its excellent recreational and commercial fishing, scuba diving, turtle nesting, whales and other important species, the area will always be under pressure from users with diverse interests and it is the responsibility of the iSimangaliso Wetland Park Authority and conservation management partner, Ezemvelo KZN Wildlife, to ensure that this resource is properly utilised and conserved.

One of the most popular recreational activities within the park is fishing, divided into three main components: estuarine, shore-based and boat-based. 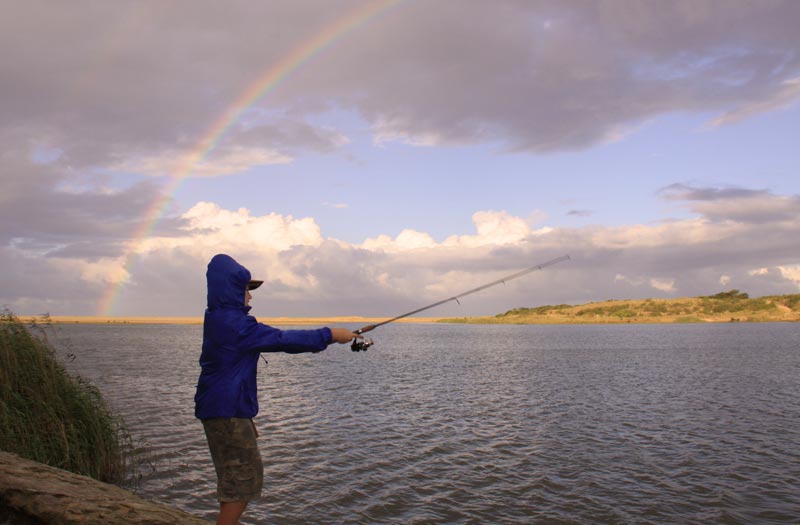 Estuarine fishing takes place in the the Kosi Bay and Lake St Lucia systems. Kosi Bay is boat-based only and restricted to the main lake. Fishermen target mostly Natal stumpnoses and spotted grunter here. Most people are bait fishers but in recent years there have been increasing numbers of dropshot and fly anglers making some excellent catches, as there are many optic feeders such as kingfishes, seapikes and rock salmon that are much less common in the turbid (murky) waters of Lake St. Lucia. Catches at Kosi Bay have declined over the last three decades but in the last couple of years are beginning to show indications of stock recovery thanks to the measures taken by iSimangaliso management. Kosi Bay is probably the best place in South Africa to catch really large rock salmon, seapike and giant kingfishes. 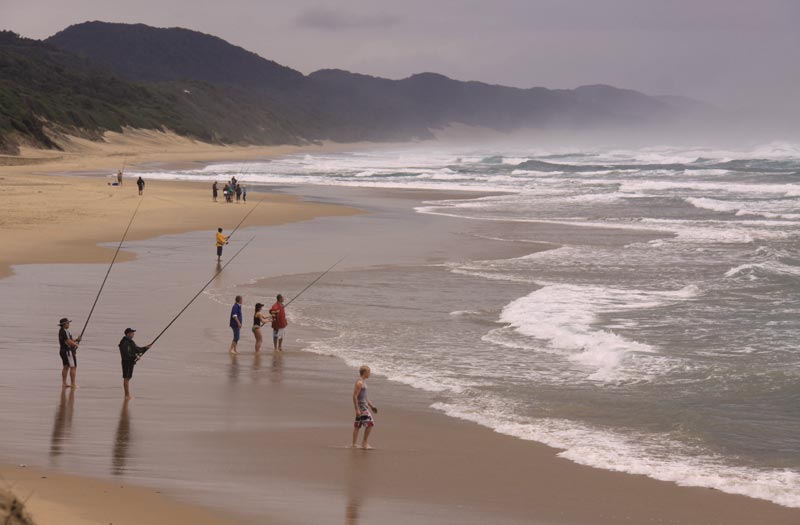 Cape Vidal is one of the most popular family resorts in South Africa, where the year-round warm waters and particularly mild winters attract thousands of fishing folk every year. Locals claim that there is no such thing as a bad day at Cape Vidal. 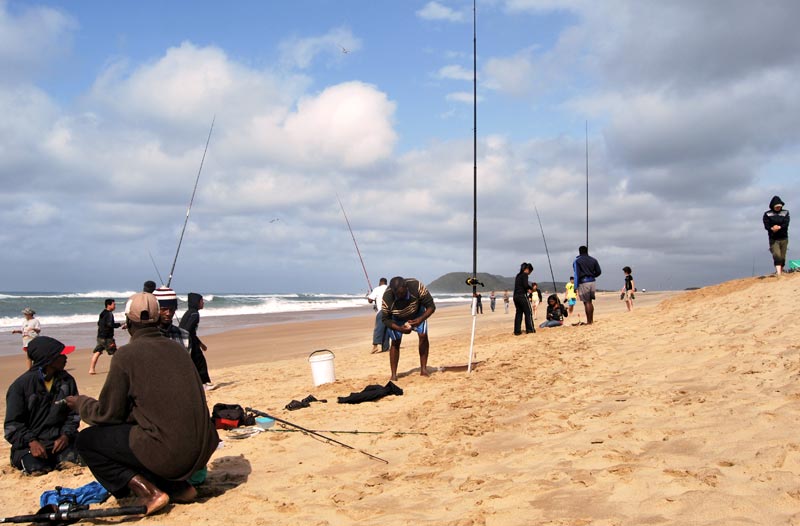 When the shad are running, St Lucia beaches become a hot spot for fishers from all over the country.

Shore fishing is carried out along most of the shore except for the Sanctuary areas Leven Point (north of Cape Vidal) and Red Sands (south of Sodwana Bay), and south of Kosi mouth. Nearly all of it is by rod and line – usually traditional bait fishing and spinning but, more recently, fly fishing and dropshotting have become popular. Top target species are speckled snappers, rock cods and Natal stumpnoses. They also target marine predators such as kingfishes and spotted pompano.

Various legislation exists around fishing, including the Marine Living Resources Act 18 of 1998 & Regulations and the World Heritage Convention Act & Regulations. As the managing authority, iSimangaliso also adds internal park rules as required, including:

The last rule above, initially delayed in implementation, will be rigorously enforced from 1st May 2014.

Going forward the Park intends to pass a ruling in respect of game fish - which include billfish and kingfish (marlin, sailfish, dorado etc.). Ultimately the Park will become a tag and release destination in line with global best practice. Time frames have not been set for this. 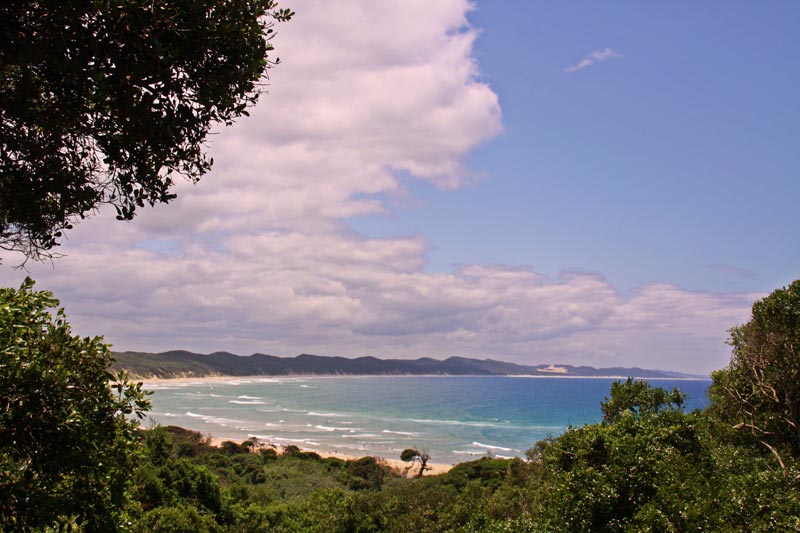 Sodwana Bay is not only a renowned scuba diving destination, it is also one of the busiest launch sites in the southern hemisphere and a highly popular destination for deep sea fishing.

The coastline of the world heritage site has always been incredibly popular with fishers from all over the world, including commercial boats venturing into our waters from other parts of the world – and there has been a heavy price to pay. As international fish stocks decline and in some cases, overfishing has reached critical levels, conservation bodies have taken cognisance of the need to radically address the issue before it is too late. If we are to ensure that future generations of park users, as well as marine species, are to experience a similar environment as the current one, strict measures must be applied and adhered to.

Numerous fishing clubs have enjoyed the bounty of the warm Indian Ocean (an average of 100+ per year), some of whom have been returning to the park for decades. Of these, some twenty are large, boat-based competitions with the remainder being shore-based. All competitions are now only catch and release. They are fiercely competitive, relying on trust, and only fish that are released alive, with witnesses, count in the competition.

In recent years, the Authority has implemented control measures to manage and streamline the activities of the largest groups. Competitions such as the Myn-Manne, Billfish, OET and Nationals – all longstanding significant contests – have been brought into the permit system since 2012.

iSimangaliso Tourism Operations Manager Sizo Sibiya, says that “There has been remarkable progress in terms of compliance since iSimangaliso started working with fishing competition organisers. In the first phase, we began issuing permits to the four biggest competitions mentioned above. Going forward we intend to issue the same conditions to all competitions taking place inside the Park irrespective of their size. We have found that most anglers understand and support the importance of long-term conservation of our resources and are more than willing to comply.”

Participating anglers currently contribute R20 per angler to the iSimangaliso Rare and Endangered Species Fund (RESF) where every single cent raised in this way is injected directly into conservation for these species resulting in very visible and tangible benefits which in 2013 included the introduction of 15 oribi into the 66 000ha Ozabeni section of iSimangaliso (12 of which were fitted with tracking collars), the purchase of four lion satellite collars for the newly introduced population into iSimangaliso’s uMkhuze section, and rhino foot collars and horn transmitters. Since implementation of the fishing permit system last year, about R20 620 has been donated by anglers to the RESF, part of the overall R239 590 raised to date.

iSimangaliso CEO Andrew Zaloumis thanked the fishing fraternity for the part they played in this fund raising effort, noting that “anglers form a huge and important sector of the visitor base within iSimangaliso and it is greatly encouraging to see the positive approach taken by competition organisers in adapting to the new permit system, as well as their significant contributions to the park’s fund”.

Spokesman Japie van Wyk of the Northerns Game Fish Club (NGFC), which organises one of the annual competitions held at Cape Vidal since 1998 - the TOP 10 Game Fish Invitational - says that they are “proud to be associated with iSimangaliso and Ezemvelo KZN Wildlife. We cherish our on-going relationship and therefore work with you on all aspects of such a competition.” In recognition of the importance of conservation, “ the NGFC is always looking for new ways to keep our competition in line with new trends as far as keeping it as low impact a competition as possible.”

1. All anglers must have in their possession valid fishing licenses & iSimangaliso entrance permits

2. No angling in sanctuaries or closed areas including Two Mile Reef

3. Participants must comply with all legislation and park rules

4. All sharks and rays are to be returned alive to the water

5. No structures and/or fires are to be erected or lit outside designated areas and no boats are left on the beach

6. Anglers are open to inspection by Ezemvelo KZN Wildlife during and after the competition

7. Turtles may not be approached or interfered with in any way and the use of lights/torches is to be minimised (and preferably with red filters) particularly during turtle breeding (October – March).

8. All fish are released (even dead ones) after measurement in league shore fishing competitions

9. No gaffs or stainless steel hooks are allowed; Slide bait hooks must be squashed in league shore fishing competitions

10. Accommodation used within the Park must be legitimate / authorised facilities 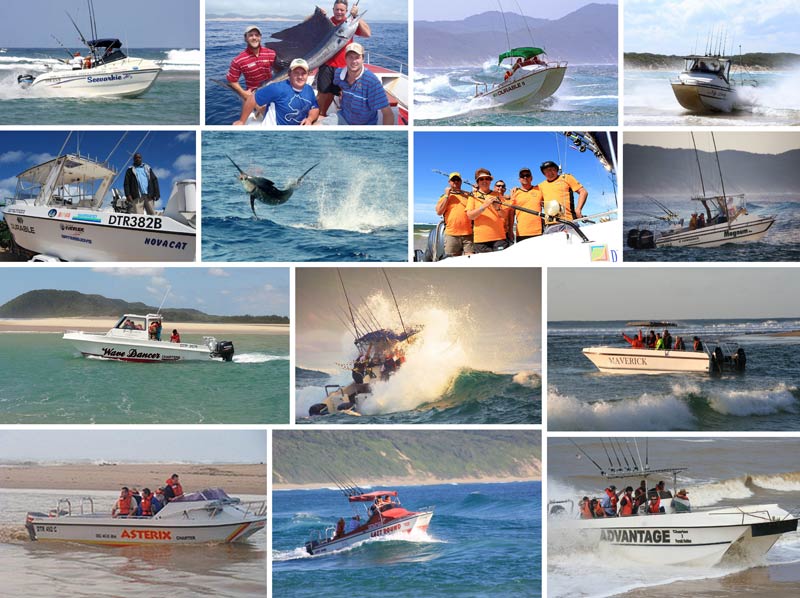 iSimangaliso has regularised commercial activities within the park and this includes charter fishing, with twelve licensed operators currently in place at Sodwana Bay and St Lucia/ Cape Vidal**. In addition, any external party wishing to undertake a commercial trip in iSimangaliso may apply for a daily permit.

According to one of Sodwana Bay’s concession holders, Peter Jacobs (Sodwana Bay Fishing Charters), this area is “especially popular due to the fact that the fishing spots are so close to the launching site, unlike Richards Bay and other fishing spots, where you have to travel for kilometres to reach the good fishing spots.”

“The good and most popular spots to fish are the following: